One Year On Discovering African Cuisine

This article is about the panel discussion, progress made in a year and next steps we should make to promote African Cuisine.

On the 20th October 2015 during Food Tech Week the African food technology king Steve Amara posed the question. How can African cuisine be better discovered in the digital world? He had put together a panel of experts (except of course the pretender West Africa Cooks) and hosted an event at the location WeWork Devonshire Square in London. So the moderator was Ronke Lawal and panel made up of Steve, Freda, Leslie, Hortense, Makda and Fafa. Steve found a panel of leaders in their field see below for more on them.

It was wonderful to see front of stage on the night black women entrepreneurs doing the business. Empowered. You have to think about this. The next generation needs real role models who they can relate to. Identity in the diaspora for our young people is important as they enter adulthood. Let us be honest, it is rare to see an event like this in the city of London. This event attracted many of you too. Guests who are also leaders included Jessica Laditan of Pop Up Africa; Omo (who partners with Eulanda) Hey! Dip your toes in!; brands like Chosan drinks and Chika's the Nigerian inspired snacks sent representatives; Jason of Jason's Little Kitchen was there, as was Tokunbo of Tokunbo's Kitchen; Kay Akinwunmi of afroexpress; Lope blogger chef and Louisa ‏of afroblush and more. All advocates. A star studded audience. This was all filmed by Lawrence of honaafrica. 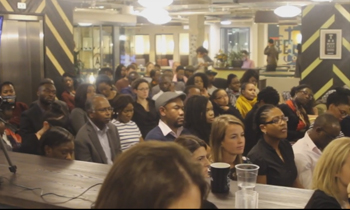 We had an agenda for the evening and a panel discussion, Q & A followed by networking. Ronke asked us questions and we discussed. Please see the video again below. It was great discussion with passion. We connected with our peers, widen out network and caught up with the influential people in the industry of African cuisine, cooking and blogging. We had drinks and lovely African snacks provided by Tokunbo's Kitchen.

It was exciting to be part of this event, so much so we had to look back at this again. Then it was all over. Then what. What happened after the event. Well during the month of October Black History Month 2016 in the UK, let us look back on the recent year and see if we are making progress. It has been a year from the event Discovering African Cuisine in the Digital World. What is the state of the African Cuisine Nation?

We have been creating more supperclubs in addition to The Groundnut and The Ghana Supper Club. Here are some recent startup who had events

We have new pop-ups. The African Market moved to Camden Market (Open The Gate); Zoe Adjonyoh and her Ghana Kitchen enterprise has a permanent place in Brixton for over a year and sells at the South Bank Centre. Jollof box at Spitalfield and other locations; Charity Open The Gate has seven year birthday party; Chalé Lets Eat Ghanaian street food at Craving coffee in March and Chalé Lets Eat provides food at first ever UK Afro Punk; PaPa Spice Pop-up Restaurant in west London. Chef is now looking for funding into the new year; DCD Pop Up (Deji chef Diaries) testing the market and the party venture Chop-X-Beats has two events in East London.

Still More To Do

What a year. If you are living in London you could try African cuisine that you may never have eaten before in more places then ever. We would say that things are happening but there is more to do. We come from a low base less than 0.5% of the food market is African. Let the world know how you have done one year on. Share, discuss, it will be inspiring for us all. This is all about learning and sharing ideas.

We wish to and aims to see long term employment for African and Caribbean people in the diaspora in the food sector and a business legacy to pass on. As for me I have personally made lots of friend, people I love working with. These are therefore the best times. Think back to the buzz during Africa Utopia. Smiling faces, trading and money being made by African people. Startups become scale ups when they build strong teams of new talent, exhibit continued success and find investment. Other jobs are created and people become wealthy.

West Africa Cooks would like to see a flow of money away from our enemies, companies and organisations who see us as a meal ticket for themselves long term. KFCr*p, Mcshi&ty and Pizzahurt equals 0% investment return on our future. They sell low quality food and sugar drinks. Our children will suffer if we allow them to continue to eat from chicken joints after school or high in fat, salt and sugar convenience foods. Their future will be continued low employment opportunities, major dietary problems and poor health. We must therefore continue to increase awareness and improve perceptions of our foods and service. We have to obtain more national coverage through highly visible events in cities outside London, which will inspire the next generation. They have digital skills we need, let us bring them in. We need to teach our young people how to cook and bake healthy African foods economically. Time to take account of yourself. What have you done?

Read Jollof Rice And Where You Spend Your Money Matters

There have been some misses during this time. The New York summer African food event did not go to plan, there were many *complaints from visitors; the African food event in Stratford East London was cancelled twice; African restaurants still exist in a silo, when John Boyega visited the African south London restaurant a PR and marketing opportunity was lost soon after the Star Wars actor left his home town. Some restaurants have failed. Ulumma-B in Tottenham is one example as too the Senegalese venture Little Baobab at Clapton. Did they put their customers at the centre of their business model? The Voice African and Caribbean food directory is a poorly produced publication in copy and imagery.

West Africa Cooks still can not find a partner for this opportunity, African food and drink pairing of South African wine. West Africa Cooks attended a South African wine event in London over the summer and we continue to ask the question why are there so few black Africans in this market in ownership or management as apposed to just picking the †grapes for low wages in this valuable drinks industry. The phrase a lack of diversity are really pretty words for discrimination and racism. I am calling it what it is, racism. This is what we wish to challenge. In conclusion we hope for a brighter future for our children by encouraging a focus on the long term and the next generation. Let us continue to support with money and then give feedback to African foodies.

We know that technology makes food discovery easier than ever
African in the diaspora are claiming their cultural heritage
We need to continue to celebrate the greatness of African cuisine
Let us support each other, bring in the youth with their skills, enthusiasm and network
We are putting Africa on the map for our children, our community as well as for ourselves

How have we done Steve?

* Food traders were not qualified to sell food so could not participate in the event
† As I was drinking South African red wine celebrating at the launch party of Africa Utopia inside the Royal Festival Hall. Black South African grape pickers were striking for more pay