The Fight To Make World Jollof Rice A UN Day

West Africa Cooks is campaigning to make World Jollof Rice Day a United Nations International Day. Well World Jollof Rice Day has global reach, media interest and the public engaged. You may laugh but through popular foods you can start the conversation off with everyone and carry this through into the *next UN day which is talking about humanity, human rights and African people.

I found out recently we have International cat day what the f*&k is that all about. What next international black pussy day. umm that one sounds... People care more about their animals than other people and you then have Rice Pudding Day, so why not United Nations World Jollof Rice Day.

A UN World Jollof Rice Day will create long term benefits. It will

"A people without the knowledge of their past Jollof history, origin and culture is like a tree without roots." - Marcus Garvey

Read Three Reasons Why You Should Document Your Jollof Recipes

Jollof rice, also called 'Benachin', meaning one pot in the wolof language, is a popular dish all over West Africa. So why Jollof Rice? There are many variations of Jollof Rice. Different recipes create competition and debate. The most common basic ingredients are: rice, tomatoes and tomato paste, onion, salt and red Pepper. Beyond that, nearly any kind of meat, vegetable, or spice can be added.

The Word Jollof comes from Wolof people and it is now confirmed that it has its origins among the Wolof people of Senegal and Gambia who make a rice and fish dish they call Ceebu Jën or Benachin. See also Jollof or Wolof rice? and West African recipes like Liberian Jollof Rice.

West Africa is distinctive because of geography the massive Sahara desert to the north, ocean coast to the west and south. Cameroon Mountains in the east are the natural border of the region. The has always been a constant flow of people traveling around the region.

The original jollof wars started in the 19th century at the Berlin conference, when the European powers carved up Africa into regions, controlling with local governance. The division did not take into consideration local language, tribes, kingdoms and empires. Geographic countries were invented and manufactured like this campaign has been. French speaking and areas English speaking side by side. Previous Portuguese colonies are there too. Jollof country was divided, ruled and colonised by Europe. Division has had a long lasting effect. My family comes from Sierra Leone (Krio/Creole), but I know I have family in Guinea, Ghana and roots in Nigeria. When someone asks me where I am from I like to say West Africa I am West African which rejects the Berlin conference divide.

340 million people live in West Africa more than east, central, north and south all the people claim jollof as their dish.

The Business Of African Cuisine

With the rise in African music in Afro-beats with the rise in African fashion in hot designs from our heritage we see a rise in African food, recipes and cooking. Jollof rice is eaten and loved across West Africa and this staple food is getting the respect and appreciation it justly deserves. Every West African community believes that they make the best version of the rice dish which originates from Senegal. So this is starting to look like business opportunities which can in the future create employment. Opportunities exist for first, second and third generation Africans in the food industry to tell the African story. African and Caribbeans business have a less than 0.05% market share of the supperclub 2015 market. I have done the research, but there is a demand for African heritage.

Read Three Reasons Why You Should Start An African Supper Club 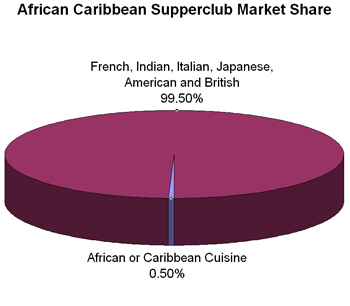 Read Is £35 ($40) For An African Dinner Value For Money And Worth Paying For?

Lets make more of jollof rice, lets discuss, create campaigns and competitions which will be inspiring to a West African jollof nation and the world.

So who is going to take up the Jollof Challenge? Eating jollof for seven days, from seven West African countries and seven different recipes? Eat from the Gambia, Ghana, Guinea, Liberia, Nigeria, Senegal and Sierra Leone. Charity fund raising causes for Africa water aid and Ebola ? Debate the merits or pitfalls. Or eat African for six days and on the seventh jollof rice. In addition go without coca killa, try palm wine or a hibiscus drink for 40 days till the 22nd August.